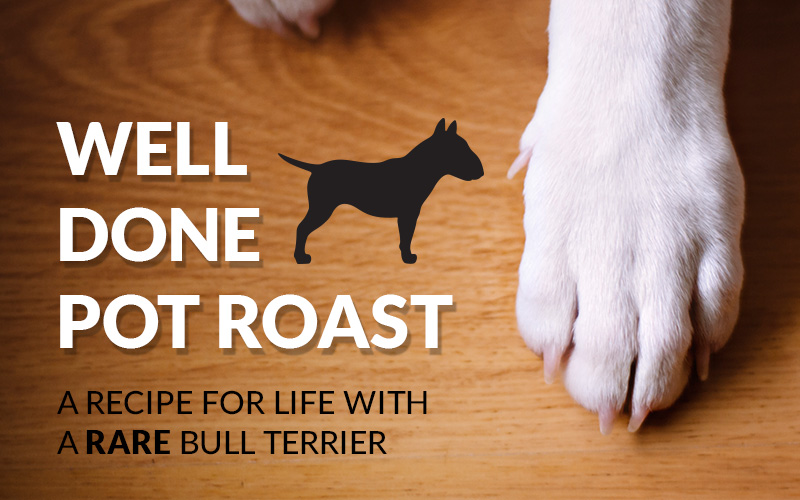 I mentioned in my previous post that I’ve just returned from a trip to Europe to see my husband. Roast is happy to have me home but it was clear after just a day or two that neither of us was feeling particularly well.

Pot Roast is the dog of more than $30,000 in vet bills. I kid you not. And it’s not, in general, “health problems” per se, but rather just stupid reactions to stupid issues. Like tearing a toenail and having it go septic and nearly kill him. You know…that kind of thing. But he was shaking his head quite a bit and seemed generally under the weather. He hadn’t lost his appetite, mind you, but then Roast has nearly died twice and was still snarfling up kibble like it might never appear again. So off to the vet we went.

Turns out, he had some major gut bacteria happening, along with an infection in both ears. He also just so happened to step on a piece of glass and so it had infected while I was away and required antibacterial cream, wash, and of course, attention. We were given a course of antibiotics, some probiotics, and Pot Roast left full of snuggles from the vet staff and a shiny new bone to make up for yet another day at the veterinarian. So currently, my days are this: Wake up and have breakfast. Stuff his antibiotics in Pill Pockets. Soak dog paw in antibacterial wash for 10 minutes. Rinse. Wipe clean. Blow dry paw (seriously). Then slather on antibacterial cream on said paw. Monitor Roast, the most determined dog alive, to ensure he does not lick the cream off in the next 10 minutes. Repeat process 3 times per day. Oh yeah…and somewhere in there, between the 1.5 hours a day giving Pot Roast the manicure of the century, I work.

Incidentally, the next day, I noticed my ear still hadn’t cleared from my flight and refused to pop, and come to think of it, I wasn’t feeling too hot either. I wondered if it wasn’t a carry on from the cold I had nearly our entire trip to Europe, and I hadn’t stopped sniffling and blowing my nose since the plane landed. But there was a persistent new ache keeping me up at night, so off to the doctor I went. You guessed it: ear infection. I got my own course of antibiotics to manage.

It’s worth noting that when I have an ear infection, other than continuing to smother me with love, Pot Roast isn’t overly helpful in my healing process. He doesn’t stop squeaking his various squeaky toys to ease my headache. He doesn’t administer drops or my own antibiotics. Pot Roast, on the other hand, is receiving the King Tut of treatment in his own illness.

But here’s the things: pets are work (and anyone who says otherwise, please, do share your secrets). We pick up their poop, feed them, and love the snot out of them. Our pets can’t offer most of this stuff in return, but what they do give us is something intangible. It only takes one wide-eyed look, one gentle face lick of tears, to make you realize every single moment is worth it. Even the ones spent blowdrying his darn paws.