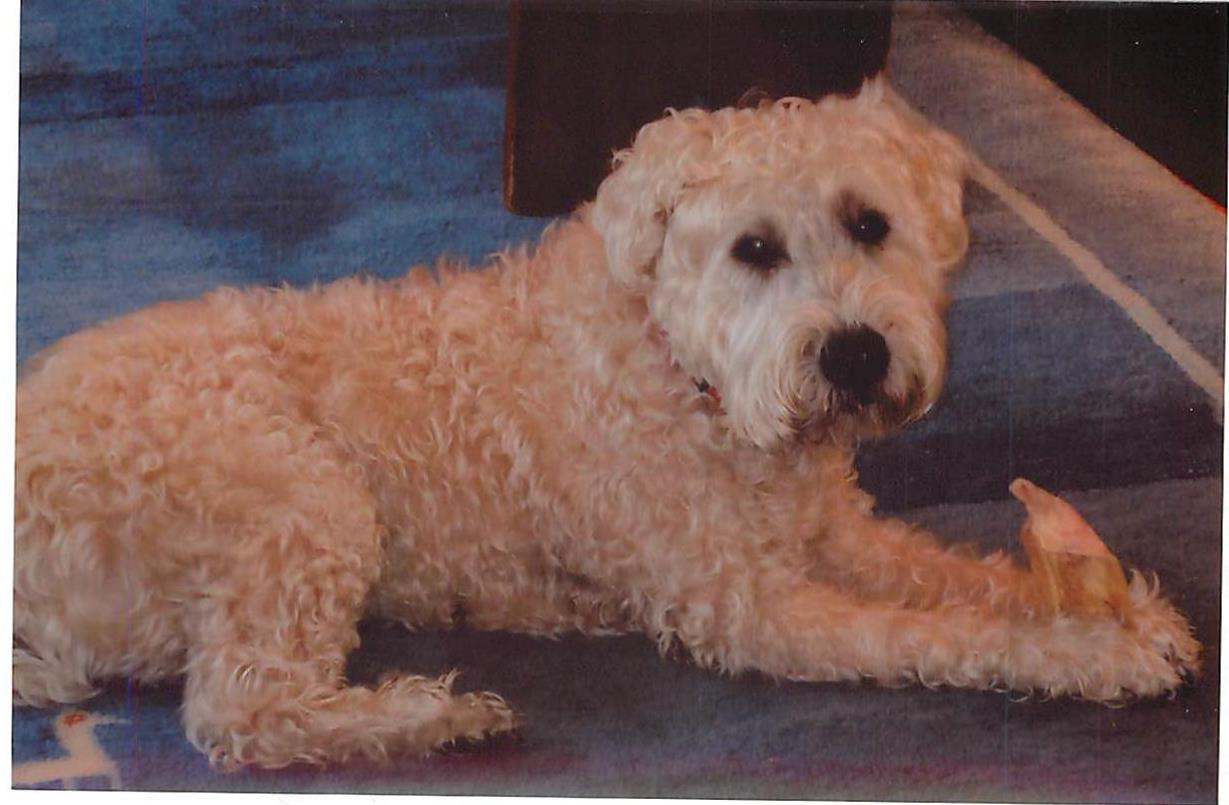 My friend Ann and I used to walk together on warm evenings or weekends. I was without a dog at the time, so I always stopped to pet the ones we met. So much so that one time, I was patting and scratching a cocker spaniel without realizing it was Charlie and Tony Parsons was on the other end of the leash.

On this particular evening, when I interrupted our walk yet again to scratch a mutt’s ears, Ann said, “for god’s sake, get a dog”.

That night I googled British Columbia Wheaton terrier breeders since I knew this was the breed I wanted. As luck would have it I spoke to Penny a breeder in Surrey who said there might be a Wheaton available on Vancouver Island.

The following Saturday I took the ferry to Swartz Bay. The purpose of the trip was for me to be interviewed, assessed, evaluated and rated on my dog-ownership skills and personality. I was anxious because I was desperate to pass Jon and Karen’s tests because their dog: neutered male, 19 months, trained was exactly what I wanted.

On entering the sliding side door of their van, I met Scout. He was standing poised but excited on the bench seat. I sat down beside him. He sniffed me; he stood on me; he licked me; he circled then returned to stand on me and lick some more. There is an expression, “in your face” and that describes Scout that morning. I wanted to use both my hands to shove him away, but I doubted that action would endear me to Jon and Karen, so I tolerated Scout’s show-off enthusiasm and sloppy affection from the ferry terminal to their Victoria home.

Once there I met Scout’s grandmother, mother, aunt and four other Wheatons. They were confined to the kitchen, but Scout was not. After he performed on the back lawn, he joined us in the family room. He was free, and he knew it was his moment to shine, his 15 minutes of fame, his moment of glory.

Jon, Karen and I sat on three separate cushions of their large u-shaped sectional chatting. Scout jumped up to join us. Realizing that this wasn’t enough of a show, he leapt up and proceeded to strut back and forth along the narrow back edge of the sectional, reminiscent of a mountain goat balancing on a cliff or a tight-rope walker. If he had been human he would have shouted, like any two year old, “look at me. Look at me.”

I didn’t return to Vancouver with Scout that day. However, a couple of weeks later Jon and Karen delivered him to my home where for the past 12 ½ years he, my buddy, my boy, my Scoutie, has stayed by my side except on those occasions when he has been an unheeding, brainless, crazy terrier.