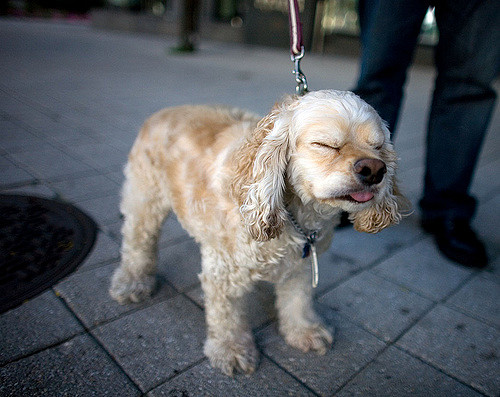 What is reverse sneezing?

“I think my dog is having trouble breathing,” “It sounds like my dog is choking/honking/snorting;” These are often descriptions that precede a reverse sneezing diagnosis.

Reverse sneezing can be a disconcerting event; as it usually seems like the dog is having trouble breathing, making strange/unpleasant respiratory sounds, or even is described as choking. It can often mimic the honking noise made by a dog with a collapsing trachea. The sounds and look of reverse sneeze can be scary, but is a far simpler condition that usually does not require treatment.

The most common cause of reverse sneezing is irritation of the soft palate and throat resulting in a spasm. During this spasm, the dog’s neck extends and chest expands as the dog tries harder to inhale. The trachea has narrowed, making it harder to get the normal amount of air into the lungs. In a regular sneeze air is pushed out through the nose, in a reverse sneeze air is pulled in rapidly.

There are many different things that could cause this kind of irritation resulting in the spasm and subsequent sneeze –excitement, eating/drinking, pulling on the leash, mites, pollen, foreign bodies in the throat, perfume, household cleaners, and allergies are a few of the common triggers.

Small breed dogs are particularly prone to reverse sneezing, possibly because they have smaller throats; Brachycephalic dogs (flat faces/noses –pugs, boxers etc.) with elongated soft palates occasionally suck the soft palate back into the throat resulting in a reverse sneeze.

What should you do?

Reverse sneezing rarely requires treatment; once the sneezing has stopped the spasm is over. Some episodes might make your pet feel anxious, so it’s important to stay calm. Sometimes massaging the throat can help to stop the spasm; covering the nostrils to cause the dog to swallow can clear the irritation and stop the sneezing. If an episode lasts long and if your pet will tolerate it, you can try to depress the tongue to open the airway.

When to see a vet

The first episode can be scary –if you are unsure whether your pet truly is reverse sneezing it’s best to see your vet. It can be useful to take a video of the episode to show your vet in the event your pet has stopped.

If reverse sneezing becomes a chronic rather than occasional occurrence there may be an underlying cause. Prolonged episodes, bloody, yellow discharge or any other accompanying respiratory problems should warrant a trip to the vet.

Some dogs may only have one episode, while others could have many throughout their lives. To find out what may be causing your pet to reverse sneeze pay attention to when it starts –where they are, what they are doing, perhaps an identifiable trigger will be present.

Remember, reverse sneezing looks much scarier than it actually is for both you and your pet. Try to stay calm and the episode should be over soon. When in doubt, see your vet.