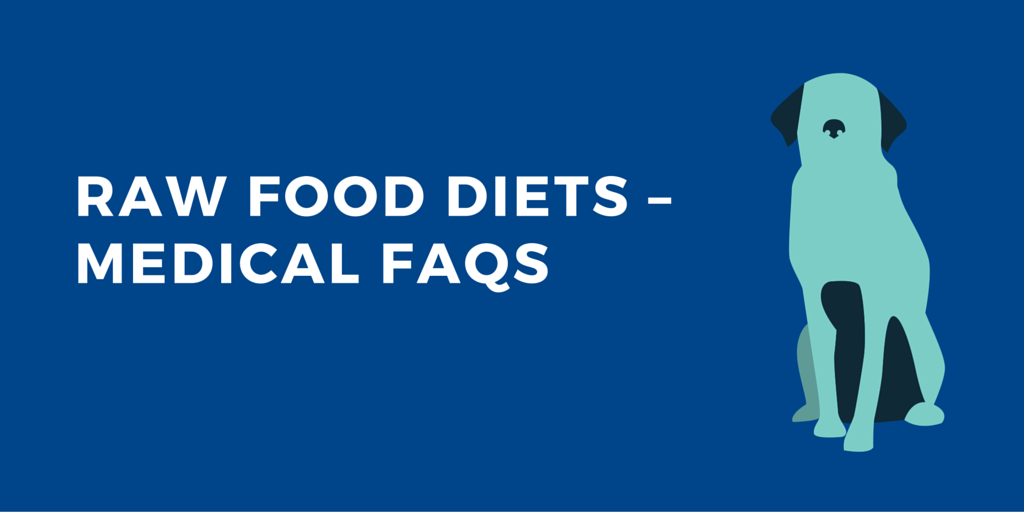 This FAQ put together by the Veterinary Information Network looks at some of the questions and controversies concerning raw food diets.

*The following has been reprinted with permission from VIN.

What is a raw food diet? Are there different types?

There are many types of raw food diets, both commercial and home prepared. Raw food diets contain raw meat (+/- bones) and often plant ingredients (fruits, vegetables, and, much more rarely, grains). Recipes and guidelines for home prepared raw food diets are plentiful on the internet and in books (see “Other resources” below for some links to rational information about raw food diets).

What are the proposed benefits of a raw food diet?

Advocates of raw food diets claim benefits ranging from improved longevity to superior oral or general health and even disease resolution (especially GI and dermatological disease). Thermolabile components, such as enzymes, vitamins and certain amino acids, are preserved in raw food diets. Enzymatic destruction is generally of little relevance, as many (but not all) enzymes are inactivated in the stomach by peptidases (pancreatic enzymes and lactase obviously survive transport through the stomach). Further, all necessary enzymes utilized for digestion of dietary components are made by the healthy gastrointestinal tract and pancreas. Additionally, no studies have demonstrated a benefit of preserved enzyme activity in raw food diets, other than the action of papain (extracted from papaya) on hair balls in humans, but not in rodents (Baker et al 2007, Krugner-Higby et al 1996). Conversely, no studies have refuted these claims.

In an unpublished study by Glasgow et al, cats fed a raw food diet subjectively found the diet more palatable, and had better hair coats and stool consistency after 10 months of feeding, which is consistent with what many owners report.  No control group was described in this study, and the results have never been subjected to peer-review, so clinicians should view this information skeptically.

Have any of these benefits been documented/proven?

Most commonly, purported benefits are restricted to testimonials, which are frequently posted on the internet. However, no published peer-reviewed studies exist that would support any claims made by raw food diet advocates, and no published studies have examined differences in animals fed raw animal products to those fed any other type of diet (kibble, canned, or home cooked). Those studies are currently in progress but findings have yet to be published.

What are the risks and concerns with raw food diets?

The two credible concerns related to raw food feeding are food safety and nutritional adequacy. Food safety concerns relate to bacterial or parasitic contamination and the associated public health concerns (LeJeune 2001, Joffe and Schlesinger 2002, Finley et al. 2006). However, the nutritional adequacy and nutrient balance of both commercially available and home prepared raw food diets is also an important issue, particularly during growth. One study (Lauten et al 2005) determined nearly 70% of home-prepared diets were deficient or unbalanced in key nutrients. Certain essential minerals, especially calcium, zinc and choline, were often below NRC recommendations. In other recipes, the diets were unbalanced (i.e. contained all essential nutrients but one or more nutrients were included in disproportionate amounts within the recipe).

Nutritional inadequacy of a raw rabbit diet was reported in an undated, unpublished study funded by the Winn Foundation. Cats were fed raw ground frozen whole rabbit or a commercial diet for over 10 months. All cats in the raw food group had better stool consistency and coat quality (subjectively), BUT all developed taurine deficiency (and one died from heart failure secondary to DCM), despite laboratory analysis of the ground rabbit which indicated sufficient taurine content, although the authors did not state which laboratory standard or minimal requirement value was used. This study suggests that even “whole prey” dietary models may be inadequate for long-term feeding in cats. It is important to note that the taurine requirement for cats fed differing raw diets varies with the diets. This is important since the amount required for cats eating canned vs dry extruded diets differs. In general, 900 ppm taurine in raw food maintains normal plasma and whole blood taurine concentrations – thus, raw food diets should exceed 900ppm taurine (Kirk CA, unpublished data). Taurine metabolism is also affected by the gastrointestinal microflora, dietary ingredients, digestibility and processing, and probably other factors. Animal products vary widely in taurine content, and rodents are reportedly higher than lagomorphs (Spitze et al 03, Hedberg et al 07).

Have any of these risks been documented/proven?

The nutritional adequacy of any home prepared diet, raw or otherwise, must also be considered. Issues of nutrient deficiencies in various recipes have been documented (Freeman and Michel 2001, Roudebush and Cowell, 2002, Streiff et al. 2002, Lauten et al. 2005). A report of two litters of pups fed a raw-food diet associated with nutritional osteodystrophy after just 4 weeks of feeding has been published (DeLay & Laing, 2002, Proceedings). More recently, Taylor et al documented nutritional disease in a puppy fed raw ground beef and an organic pre-mix (Taylor et al 2009). Not all raw food diets are necessarily imbalanced; however, any recipe should be analyzed by a qualified and experienced nutritionist (at least by computer) for nutritional adequacy before long-term feeding.

Do the benefits or risks of feeding a raw food diet differ if the diet is commercially produced vs. home prepared?

However, while some of these diets have been subjected to AAFCO feeding trials, the results of these trials are considered proprietary information and have not been published. Although some raw food proponents raise concerns about the validity of AAFCO trials in establishing nutritional adequacy of diets, it is prudent to ensure nutritional balance with proper formulation at the very least.

The FDA CVM published non-binding guidelines for the preparation of raw food diets for pets in 2002. These state that “The FDA does not believe raw meat foods are consistent with the goal of protecting the public from significant health risks, particularly when such products are brought into the home and/or used to feed domestic pets.” Thus, the FDA expresses concerns about human health issues in preparing raw food diets, either at home, or commercially.

How should I advise my clients who are feeding raw food diets or who want to discuss trying this type of diet?

It seems prudent for the veterinary practitioner to develop policies for accepting animals fed raw food diets as boarders or in-house patients because of zoonotic potential. (Fuller et al 2008, Lee et al 2008). Owners should be counseled on infectious disease risk and management (prompt removal and appropriate disposal of feces, etc). Additionally, a recently published veterinary perspective on the AVMA guidelines for the use of animals fed raw-food diets in health-care facilities stipulated that ” animals that have been fed any raw or dehydrated (but otherwise raw) foods, chews or treats of animal origin within the past 90 days” should be excluded from health-care facilities, because of the risk of transmission of zoonotic organisms, such as salmonella and campylobacter (Lefebvre et al, 2008).

Dr Claudia Kirk (VIN Consultant) advises clients interested in feeding raw food diets that “most, but not all, healthy adult animals will tolerate a raw food diet. Similarly, not all raw food diets are equivalent, or nutritionally sufficient to prevent problems. Recipes should be evaluated by a nutritionist, bones should be ground and never fed whole or in pieces and safe food handling practices are essential in minimizing risk of contamination. Finally, there are no clinically proven benefits of a raw-food diet, but there are documented hazards and risks. ”

Clients should also be warned of the potential for intestinal perforation or obstruction by bones. Dental fractures can also occur as a result of chewing raw bones.

This FAQ was reviewed by Jennifer Larsen, Susan Wynn and Claudia Kirk for the VIN Community