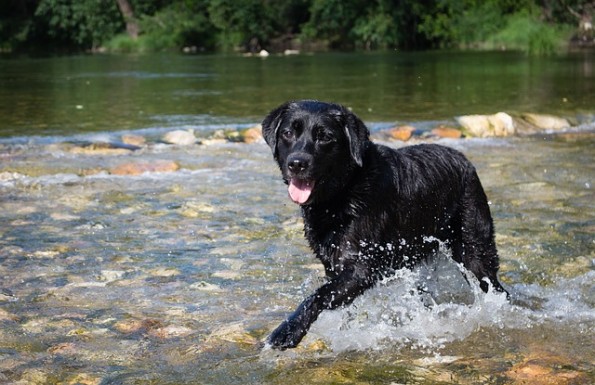 It’s vaccine awareness month at Amherst Veterinary Hospital and I thought I would share a case that highlights the importance of vaccines. It was one of those difficult cases that due to the owner’s perseverance allowed for a happy ending.

Jed was a previously healthy 8 year old Beagle that was brought into Amherst Veterinary Hospital for not having eaten for 2 days. The owners were concerned he had something stuck in his intestinal track because the day before he had a bout of diarrhea that included parts of a chewed up tennis ball.

On the physical exam Jed’s abdomen was comfortable and everything else checked out normally except for him being lethargic. We performed x rays of his abdomen and they were normal, ruling out the possibility of a foreign body stuck in his digestive tract.

Bloodwork was done and revealed that Jed was in acute, severe kidney failure. During the course of testing, Jed’s kidneys had completely shut down and he was no longer producing urine.

Jed had to be put on intravenous fluids to correct his dehydration and to flush the accumulating toxins in his blood due to his kidney failure. However, because Jed’s kidneys had shut down and he was not producing urine, the fluids he was receiving were accumulating in his tissues and lungs. He needed to be given diuretics to counter this problem and had to be monitored intensively.

Meanwhile, Jed’s long term prognosis was uncertain because while we treated him for his kidney failure the cause was still unknown. Did he get into a toxin such as antifreeze or had he pick up something infectious? Ingestion of antifreeze causes severe, irreversible damage to the kidneys. Jed was not going to recover if the cause was antifreeze ingestion, but because several days had passed from when we saw Jed and when he first became ill, tests to check for antifreeze poisoning would be inaccurate.

Jed was from North Vancouver with no history of having travelled outside of the Lower Mainland, so the most likely infectious cause was narrowed down to  Leptospirosis. The blood test to confirm this would take 5 to 7 days.

While awaiting results, Jed was started on an antibiotic treatment for Leptospirosis. For the first 3 days of treatment Jed showed very little improvement in his kidney function and continued to have no appetite. At this point we were still worried that antifreeze poisoning had caused Jed’s illness.

Many times throughout the first several days we discussed with the owners the possibility of Jed not recovering and considered euthanasia.   Jed was fortunate to have owners that had the monetary means to continue his treatment and the fortitude to not give up on the possibility of Jed getting better. After 5 days of intensive treatment Jed starting showing improvement in his kidney function, he was producing urine again and was regaining his appetite and energy.

The test results finally came back confirming a Leptospirosis infection. We knew then that we were on the right track with the antibiotic Jed had been receiving for the last few days.

Two weeks later we saw Jed for a follow up exam.  His bloodwork showed a complete return of his kidney function and his owners reported Jed was more energetic and hungry then even before he became ill.

Leptospirosis is a bacteria that be can carried by our local urban wildlife population including raccoons and skunks; farm animals such as cattle, horses and pigs; and of course our dogs. It is excreted in the urine of these animals and survives best in fresh water sources such as puddles, other standing water sources, lakes, ponds and rivers. It does well in warm, moist, temperature climates. Sound familiar to a typical autumn or spring in Vancouver? One possible carrier of Leptospirosis, the Raccoon. A common critter in the lower mainland.

It is also a zoonotic disease meaning that people who come in contact with Leptospirosis can become infected as well.

Treatment will involve hospitalization, intravenous fluids and antibiotics. Prognosis will depend on how early the disease is detected and how severely the kidneys and/or liver are affected. It is not uncommon to see ongoing kidney and liver dysfunction in surviving patients.

Besides discouraging your dog from ingesting water from ponds, puddles and while swimming, the best defense against Leptospiroris is prevention through vaccination.   The vaccination is given once, boostered one month later and then continued annually.

Looking back at Jed’s history revealed that he was not receiving the Leptospirosis vaccine, as his owners felt he was low risk considering he spent most of his time in the house, back yard or on leash.

After the incident however, the owners realized that there was a family of raccoons living in the nearby trees and the raccoons were likely using their back yard as a latrine.

I would recommend this vaccine for any dog that lives in the Lower Mainland, has access to puddles, muds and ponds and frequents areas in which raccoons, skunks or livestock can be found.