Dental Case: What Lies Beneath 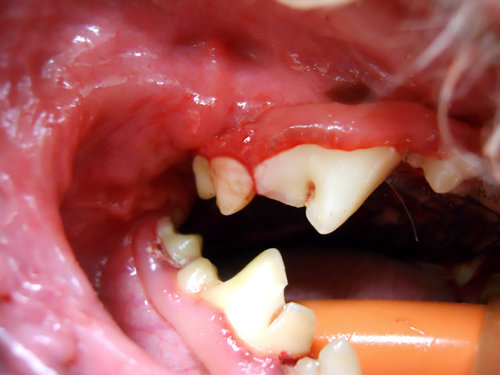 As we end Dental Month at Amherst Veterinary Hospital I wanted to share with you an interesting case we had. This dental was interesting in that it highlights how much of the disease in our pet’s mouth is at or below the gum line and can often only be seen once the tartar is removed while the pet is completely relaxed under general anesthesia. Even then the full extent of the problem is not known until the teeth and surrounding area are x rayed.

This was such the case in Teddy our 9 year old Bichon Frise. He came in for what was planned as a routine, non-complicated cleaning. As you can see by the photos, the outside surface of his teeth cleaned up very nicely with the gums and teeth looking very healthy.  This would have been the extent of the dental in the popular anesthetic free dentals offered by non-veterinarians. Looking particularly at Teddy’s large carnassial tooth, if we had stopped there we would have missed a lesion that was causing and would have continued to cause Teddy pain.

The outside surface after cleaning, teeth look healthy.

This next photo is the same tooth but the inside surface or palate side of the tooth after the tartar was scaled off. The red line is a cavity along the gum line. The probe shows that there is a depression or crater on that portion of the tooth. Once this lesion starts it continues to get deeper and larger, eventually eroding into the nerve and blood supply of the tooth causing pain for our pets much like the pain experienced by people with a cavity. The same tooth but the inside, showing a cavity.

Treatment for this tooth is removal. Unfortunately at this time we do not know of a way to halt the process once it has started and attempts to fill and seal the lesion have not been successful.

Prior to extraction, the tooth was radiographed. Radiographs are essential in dentistry because they help to guide how we extract or treat a tooth. Remember that more than half of that tooth is below the gum line and the only way to look at it is with a radiograph. A healthy tooth x-rayed, the roots, periodontal ligament and crown are clearly visible. Teddy’s cavity x-rayed. The cavity is the black spot, the periodontal ligament is no longer present.

Without an x ray of the tooth we would have never known two of the roots were ankylosed and our attempt to remove the roots unsuccessful. It would have prolonged Teddy’s time under anesthetic, caused additional pain and trauma to the area and frustrated and stressed the veterinarian as she tried to remove the root. In Teddy’s case, 1 of the 3 roots were extracted and the ankylosed roots were left undisturbed to continue its ankylosis process.

I hope that this case highlights some of the interesting dental pathology that we see in our pets and how much of it is occurring at or below the gum line in oftentimes difficult to see places.