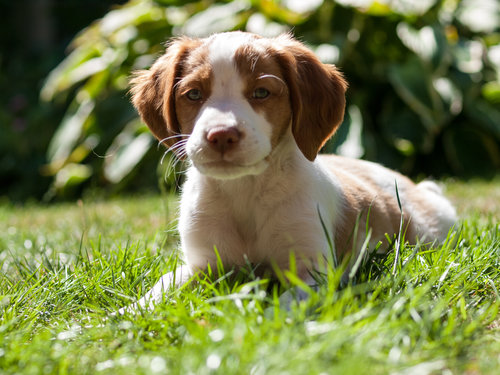 Introducing Gem! and she is a gem. Gem is now just 16 weeks old. Gem was born in May of this year and was a longed for addition to the family so that she could be a sister and companion to Scout who is a year and a half old. Gem and her big sister Scout, relaxing on the porch together.

Gem’s owners had this to say about her; “We were so fortunate to get Gem, who was born in Parksville and came from Icee, (the mom) and Hawkeye, (the dad), both parents winning championships. Gem was one of nine in the litter. We love Brittanys for their intelligence, high energy, love for outdoors and ability to give such affection to our family. Gem and Scout have such fun together, at home and running through the woods.” Gem enjoying a beautiful sunny day in the grass.

When Gem came for her visit to Amherst Veterinary Hospital she was ooohed and aaawwed over by many of the staff. Gem made the rounds of the hospital and was cuddled and loved to bits. We didn’t want to give her back!

We are so lucky at Amherst to have such wonderful clients like Gem’s owners who let us go a little puppy crazy over the new additions to their family. Of course we love the other members of their families, like Scout who are just wonderful pets and they still get ooohed and aawwwed over as well.