Dr. Loretta Yuen Introduces You To: 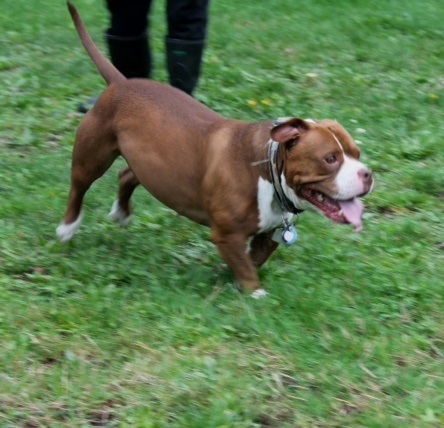 This week I would like to introduce you to Jolene, another 4-legged member of the Amherst family.  Jolene is a 23 kg, 6 year old, female pit bull cross.  Our technician, Amanda, adopted her from the Surrey Animal Resource Centre when she was brought in from wandering the streets of Surrey.   Jolene is a very loving, bum wagging, treat loving, affection hound that got herself into a little trouble a few weeks ago.

Jolene, having moved into a new home with a new dog a week earlier, decided to sample her new housemate’s food.  About 10 kg of dog food was kept in a latched plastic bin.  With the rest of the family in a different part of the house, Jolene managed to drag the bin out of the kitchen and into the living room, knock it over, paw loose the latch and proceeded to chow down on the food.  She was found with her head and half her body deep into the food bin.  She had consumed over half of the food in the bin and if she had not been found she likely would have kept eating until the bin was empty. As a result of this dietary ‘indiscretion,’ Jolene developed what we in the veterinary world call Food Bloat.  This is not just overeating, but overeating to the point where the stomach wall is over distended.  The consequences and management for these cases depends on the severity of the stomach distension and on the patient’s clinical presentation.  For mild cases of over eating in a bright dog with minimal signs of discomfort, frequent walks to promote intestinal motility and time for the food to pass through the digestive system may be all that is needed. In Jolene’s case she needed more support than that.  She presented with an extremely large and tense abdomen, a fast heart rate, high blood pressure and was extremely uncomfortable as determined by her frequent moaning and inability to rest comfortably.   Radiographs confirmed the presence of a very distended stomach full of food.

From the pressure of the food and the distension of the stomach there can be compromise of the blood flow to the stomach wall that could cause damage to the stomach mucosa and wall. As well, food, especially kibble, has the ability to absorb large amounts of water, which could cause dehydration and electrolyte imbalances.

In Jolene’s case she was given intravenous fluids, pain medication, stomach protectants and medication to promote motility of her gastrointestinal system.  Controlling pain and maintaining proper hydration are very important aspects of the care in these cases as dehydration and pain can lead to the slowing down of the digestive system.  Jolene was taken for a walk every hour and her vitals checked regularly.   Although rarely necessary, if her condition deteriorated, surgery to remove the food would have been considered. Inducing vomiting or passing a stomach tube in the hopes of expelling the food is controversial and often unsuccessful.  What commonly happens when a dog is given something to induce vomiting is that she will retch, but bring up very little food.  It is believed that the stomach is already so distended that it is unable to contract forcefully enough to bring up the food.  Passing of a stomach tube is often unsuccessful as well, since the material is often too impacted and thick to be able to come up through the tube.

For Jolene, it took about 24 hours before her abdomen felt less rigid, her heart rate and blood pressure normalized and she seemed comfortable again.  She was sent home with stomach protectants and motility medication to be given by mouth, instructions to continue the frequent walks and to slowly re-introduce her to small meals.  By day 3 she was back to her old self.   As like most dogs, Jolene did not learn from her experience and was found trying to break into the cat food, luckily unsuccessfully, a week later.  Now, not only is the pet food in secured containers but the room to the pet food area is closed at all times.

Please join us next week to meet Jericho, a lucky hamster who was found by one of our clients at Jericho beach with a big abscess on her face from overgrown cheek teeth.  She now lives with our very own Dr. Iuliana Sofronia.